Wrexham FC Disabled Supporters Association has announced that they are working in partnership with the club and Glyndwr University to deliver a state of the art viewing platform for wheelchair users at the Racecourse Ground.

So far over 12,000 has been raised for the platform which is due to be completed in time for the start of the 2015-16 season and will accommodate up to 10 wheelchair users, but this is just the start of ambitious plans the DSA have for the fully fan owned Conference side.

Steve Gilbert, vice chair of the DSA, said: ‘Eventually we want to build enough viewing platforms so all wheelchairs supporters, including away fans, can keep dry, warm and yet still have an unrestricted view.’

He said that at too many football grounds wheelchair user supporters are left exposed to the elements while watching games.

‘Viewing areas for disabled fans are often sited at the front of stands where fans may have a good view but are fully exposed to the wind and rain’, he said.

He added: “Our non ambulant fans are among our most die-hard followers and suffer a restricted choice of viewing options that are exposed to all the worst weather North Wales can offer.

He believes, however, that Wrexham are fully committed to improving facilities for their wheelchair user supporters.

“We thought they deserved better. The football club’s owner, Wrexham Supporters Trust and stadium owners, Glyndwr University, did too and agreed that we should all move forward together to make this happen.

“We had significant early donations from the Football Club by way of a £2,000 FA Community Grant earned as a reward for FA Cup progress two seasons back.

“The Trust sold off pitch squares raising well over a £1,000. Next came the WST/FC 150th Anniversary photo mosaic, which is ongoing but has raised over £4,000 to date.

“All the while individual fans and many supporters groups have quietly added their own contributions, to the point that our fund now stands at over £12,000.

“This is not enough and so we march on. We have the best fans I’ve ever seen behind us and we will keep on until we reach our goals, however long it takes.”

Their plans were boosted by support from Glyndwr University who have a campus next to the stadium in Wrexham. Staff there came up with an alternative plan for building the platform which cuts construction costs in half.

“We call on local businesses that are forward thinking and community minded to join us as partners in this project and others as we look to put our football club at the forefront of the national campaign for equal access for all”.

Wrexham DSA were established as part of the Working Together project. 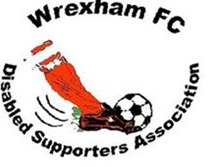