13 year old Noah is a lifelong Everton fan and season ticket holder. He has Duchenne Muscular Dystrophy and uses a powered wheelchair.

After asking for Noah’s contact details so he could send a signed shirt, Bolasie surprised everyone by arriving at the house ready to play FIFA 18 with Noah.

Noah went on to beat the international midfielder on penalties, and Bolasie promised him a rematch.

Noah’s mother Vicki said, “Yannick was so friendly and just sat in our house like he was a family friend. After Noah had beaten him, he invited us to Goodison Park on his return from injury as his guest”.

Vicki added, “Caleb is an amazing brother who is always caring for Noah so it was decided that he deserved something special too.”

Congratulations to Noah and Caleb for this great opportunity, and a big well done to Yannick Bolasie for his fantastic gesture. 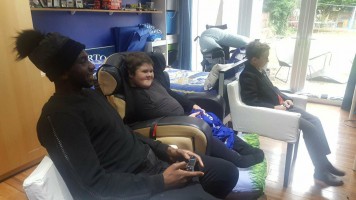