As 2018 comes to an end we take a look at some of the significant changes and stories that have taken place over the past 12 months.
FootballCricketRugby UnionRugby LeagueTennisOther

In January, Owain Davies was appointed the new Chief Executive of Level Playing Field (LPF), to guide the charity through a period of change and build on the great work that has been done.

“Since his arrival, Owain has worked with us to establish a number of new processes and developments within the organisation. We are really pleased with the impact and work that Owain and his dedicated team have achieved over the last twelve months.  The trustees look forward to working with Owain and the team to ensure the best possible match day experience for disabled sports fans.  We know there is still much to be done and we are committed to improve access and inclusion for all fans.”

In 2018, following advice and guidance and to ensure best practice in governance, Level Playing Field went through a process of incorporation.  Following the unanimous agreement of the membership, the assets and liabilities of the previously unincorporated charity were transferred to the new charitable company limited by guarantee.  The incorporated charity continues the important work of its predecessor.

The Premier League pledge has been and gone and now the dust has settled we can see a clearer picture of its impact. The league has never been as accessible with an increase in facilities across the board. Of course, there are still areas to address and LPF will work to improve these. The pledge must be the starting point and a spring board to greater access and inclusion.

In August we moved offices from Wembley to Watford. As a part of the move we uprooted to our new offices above Watford Junction Station. The process of moving was difficult, trying to find an accessible office space coupled with accessible transport hubs was very difficult. We are extremely pleased to where we have moved too, however, it further highlights the state of access in the community and clearly more needs to be done.

This year’s Weeks of Action proved to be the most successful to date! We had a 47% increase by Fans, DSAs, Clubs and Other organisations taking part in this year’s Weeks of Action. The importance of raising awareness of good access and inclusion and its positive impact cannot be underestimated. We would like to thank all of those who took part this year. The plans are in place for 2019’s Weeks of Action and if you haven’t received your participation pack please get in touch.

On the 16th and 17th of November 2018, Level Playing Field (LPF) attended the Centre for Access to Football in Europe (CAFE)’s 3rd International conference at the Estadio San Mames in Bilbao. LPF staff were speaking at the events sharing best practice from across England and Wales.  Owain Davies, Level Playing Field Chief Executive said: “The conference was a fantastic opportunity to hear about and discuss the wide range of activities done by clubs, disabled fans and governing bodies. The opportunity to hear of how clubs in Sweden (Hammrby FC) provide an inclusive matchday experience for their fans certainly shows different approaches that we can look to implement.”

LPF would like to congratulate the CAFE team on a fantastic event and we look forward to the next one!

Across the year Level Playing Field has had two new team members join the team. Neal Hickey started in April as the Development Officer, his remit is to deliver training and support to clubs and fans. Later in the year Liam Bird joined as the new Fans Liaison Officer,  his role is to work closely with DSAs to support and develop existing DSAs and establish new ones. Both have had a big impact on the team and the work that Level Playing Field carries out towards enhancing access and inclusion.

We would like to thank everyone who has supported LPF over the past year from fans, DSAs, Clubs, Governing bodies and our funders the Premier League Fans fund. Without you we couldn’t achieve what we have in 2018.

We wish you all a season’s greetings and look forward to 2019. 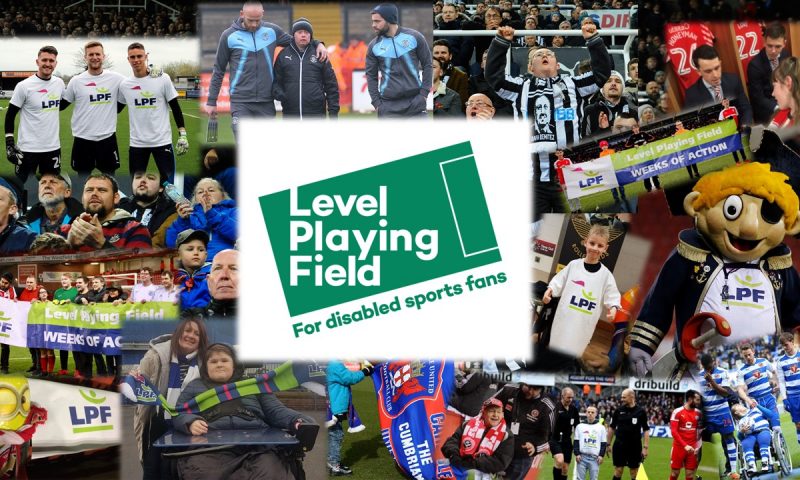