A few days before Christmas, Bruce was admitted to hospital, as his idiopathic pulmonary fibrosis condition worsened, causing him to struggle with his breathing. He was admitted to the Intensive Care Unit on Friday night (December 22) and had a massive relapse the following morning (December 23).

Bruce, who was 76, became a much-loved figure around Huish Park following more than a decade of service in a multitude of roles and responsibilities.

An integral part of the day-to-day running of the club, Bruce brought a smile to the face of all who enjoyed the pleasure of his company.

Having endured a life-changing experience together nine years ago, (Road Traffic Accident), football team manager Darren Way developed a unique bond with Bruce.  He said: “You’re remembered for the legacy you leave behind, and everyone will remember Bruce as an unbelievable ambassador for the football club but more so a warm, selfless individual who had time for all.”

“He would do anything for anyone and will be missed by so many. God bless, Bruce.”

Everybody at Yeovil Town F.C. thank Bruce for all his fine work with YTFC & YTFC DSA.

Our thoughts are with his Family and friends. 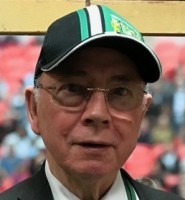