A young disabled fan, once told he may never walk by doctors, proudly led his Sheffield Wednesday heroes out on to the pitch before their game with Charlton Athletic.

Joe Danforth, 10, has the rare CHARGE syndrome and was told that he only had a slim chance of walking. Joe has since defied expectations and learnt how to walk, and on Saturday 19th March he pulled on his Sheffield Wednesday strip and led his team out at Hillsbrough in front of 30,00 cheering fans.

Joe’s dad, Martin, posted a video on twitter of the moment (see below), which has since gone viral having been retweeted over 8000 times having caught the imagination of football fans all over.

Another fantastic example of how we should always focus on what disabled people can do!

We hope Joe had an amazing day.

10 years ago our family was told my little boy would never walk, Look at him now leading out Sheffield Wednesday pic.twitter.com/WEn7EmyYgO 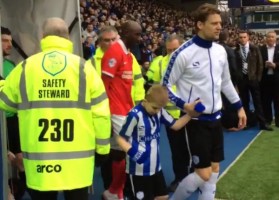