A young disabled fan was invited on to the White Hart Lane pitch to have a half time kickabout with his Tottenham heroes after a video of him playing football went viral on social media.

Eight year old Marshall Janson was initially too ashamed to play football, but once a video of him showing off his skills was posted online it was soon arranged that he would come to White Hart Lane for Spurs home game against Southampton.

During the half time break, Belgian international Mousa Dembele invited Marshall on to the pitch where he enjoyed a kickabout with Dembele and the Spurs substitutes including international players Nacer Chadli and Ben Davies.

Marshall was warmly received by the Spurs and Southampton fans, with chants of ‘sign him up’ coming from the stands.

Describing his experience as ‘awesome’, Marshall will also be invited along to Tottenham’s training centre ‘Hotspur Way’ this week where he will meet his favourite players Harry Kane, Dele Alli and Hugo Lloris.

Watch: See Marshall showing off his skills with the Spurs players

We hope Marshall enjoyed his day, and has a great time at the training centre! 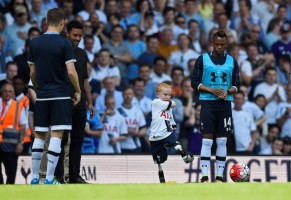