A father has called for a football fan who launched an ‘unprovoked attack’ on his disabled son for wearing a Crystal Palace shirt to come forward.

It was reported that a Brighton supporter launched an abusive tirade at Dan White, 22, who has Down’s syndrome, and then shoved him at the top of a flight of stairs.

The incident was alleged to have happened at Haywards Heath station as lifelong Palace fan Mr White and his dad returned home after the club’s 2-1 victory over Stoke, at about 6.30pm last Saturday.

Father Bob White, 60, issued a call for the culprit to come forward and hand himself into police.

“It would be great if the guy stepped forward rather than to have to hunt him down, which is what the police are going to have to do.” 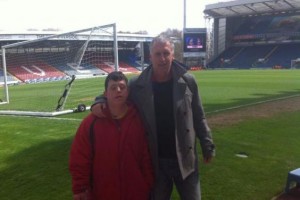