Aaron Browne, a boyhood Liverpool fan with celebral palsy has achieved his dream of meeting his heroes after a visit was arranged to the Red’s Melwood training ground.

The once in a lifetime visit was organised by the Liverpool Disabled Supporters Association and LFC Foundation, and followed Aaron being invited to watch a game in November 2015 where he sat in Anfield’s famous Kop stand.

During the visit, Aaron met Liverpool stars such as Philippe Coutinho and Roberto Firmino who presented him with a signed shirt before he then got the chance to watch the team train. Aaron’s highlight of the trip however was getting to meet Red’s boss Jurgen Klopp, who greeted and chatted to him as well as posing for what will be a treasured photograph.

Aaron’s dad Stephen spoke about the visit saying, “It was Aaron’s once in a lifetime opportunity of meeting the Liverpool players. His face lit up when he was told he was going to meet his idols”

“Aaron barely slept with the excitement the night before, although there was no problem getting him up for once the next morning.”

“It was a pleasure to see Aarons face light up when he saw the players up close and personal” explained Arlene, Aaron’s mum. “The players gave up their time and posed for photos with Aaron, and he couldn’t wait to get back to school to show all his friends and teachers”.

Stephen continued by saying. “To top off a perfect day, we were then taken to Anfield for a tour of the stadium and a guided tour of the museum by our kind host John. Aaron had a wonderful time and he is still trying to take it in that he has actually met the Liverpool team!”

Stephen finished by saying. “We as a family would like to thank the Liverpool FC Disabled Supporters Association (LDSA), and especially Steve Evans for forwarding Aaron’s name to the Liverpool FC Foundation. It made our son very happy.” 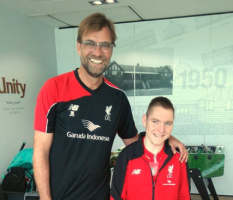